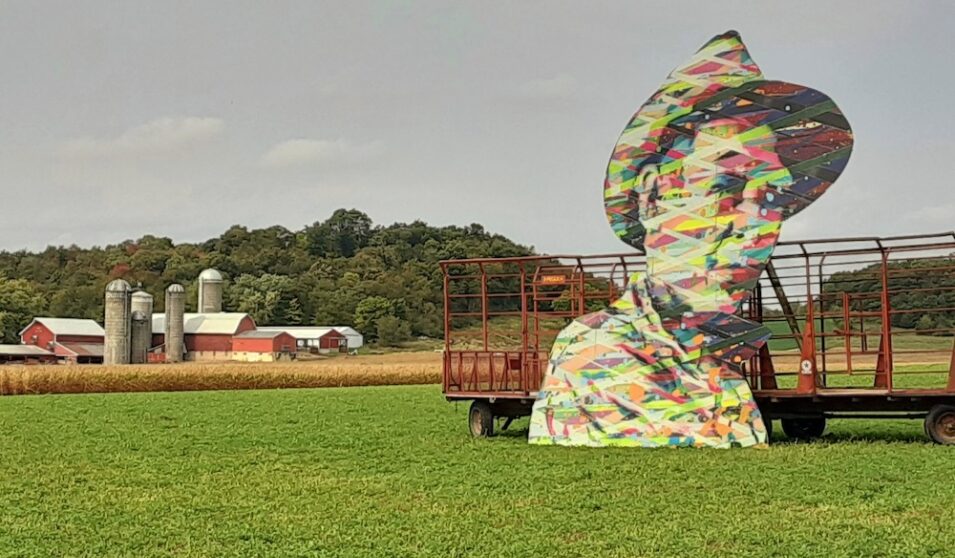 A Sprecher Saga: Six Generations on the Land

My favorite novel from the canon of settler literature is Rølvaag’s Giants in the Earth, a story of immigrant dreams expressed in the difficulties of turning prairie soil into agriculturally productive lands, a challenge that goes up against the physical demands of farming and the unforgiving weather of the Upper Midwest. Equally grueling are the isolation and loneliness, and the demons of dashed hopes and disillusionment. I won’t spoil the ending, but for those who’ve read it I doubt many forget the closing image, thick with the romance of settler sacrifice, the macabre qualities of frontier death, and any suggested triumph at best deferred to future descendents.

This narrative of determination is, of course, built on the dispossession of Native lands, a brutal and cynical process that gets either misrepresented or erased entirely in settler literature. No more. Native authors, performers, and artists of a new generation are bringing Native narratives and aesthetics into the 21st century. Politically, as well, there is new power in both Native-led resistance movements and Native individuals assuming leadership offices in government. More and more people recognize that Indigenous wisdom and leadership are key to any salvageable future for humankind. The “vanishing Indian” trope advanced by settler literature has been put to rest for good by the unvanished Indians themselves.

On the other hand, the Vanishing Farmer seems to be an accurate summation of the last forty years. Paradoxically, in parallel to the resurgence of Native America over the last generation, the traditional small farmers of America’s heartland, by and large European American, have in turn suffered a dispossession of their own. The people losing their land are often descended from the European immigrants–German, Scandinavian, Swiss, etc–who managed to buy subdivided parcels out of the tracts typically ceded under duress by the original inhabitant tribes. The settlers lived on farms worked as small owner-operators dispersed across the vast rural Midwest, ancestors of the people that got tagged “family farmers” as soon as the demise of said farms emerged as an obvious and steepening trend in the 1980s.

Iowa, Illinois, Wisconsin, Minnesota, the Dakotas–these and other states of Native place namesakes–are popularly considered “agricultural” even though the numbers of actual farmers decline just about everywhere. Chemical intensive crops are profitable only at scale; expensive inputs contribute to the indebtedness of small farmers. The harvested grain goes into a global market; tillers of midwestern soil compete against operations in Canada, in Argentina. Customers may be buyers in Japan or China.

Across the region family farms fall to foreclosure, releasing acreage that typically gets consolidated in vertically integrated mega-operations: agribusiness. As ruthless as this process is, the depopulating of the countryside as a whole makes it apparent that not all who leave farming are forced out by the untenable economics. The children of rural Wisconsin have been finding reasons for stepping out from the agricultural sector for decades already. Curious about farmers, farming, and people who grew up on Wisconsin farms, Donna Neuwirth of Wormfarm Institute introduced me to one of their DTour property owner partners, Scott Sprecher. 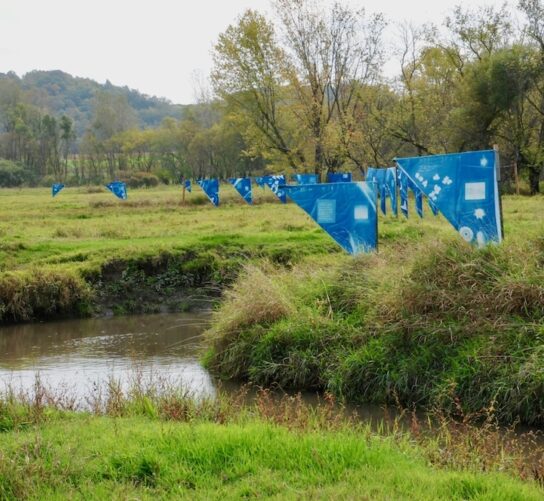 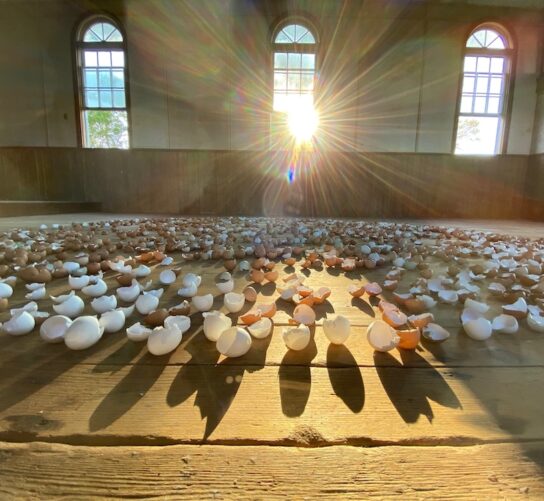 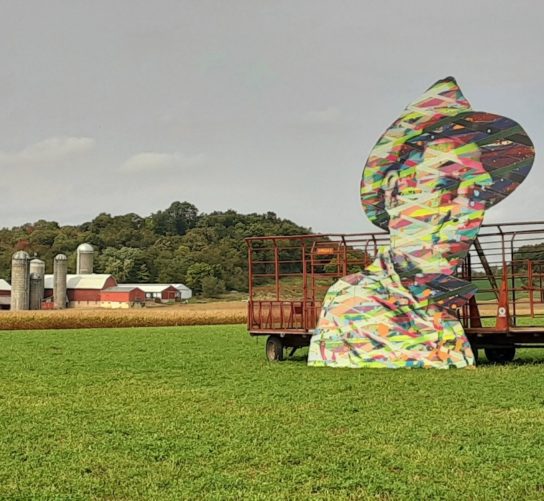 Scott Sprecher is one of these people: farm-raised and of a rural spirit, but not the farmers his parents were. He was born into a farming family, an only child who before the age of ten said something to the effect that he was not interested in farming as a livelihood. Though full of life lessons and rich memories from a childhood on the farm, he lived up to that declaration. Scott left the farm for college, the first in his family to graduate with a four-year degree. He ended up working for decades in mental health treatment and support, in time becoming a specialist in recreational therapy for people suffering severe mental illness. So he left an agricultural sector on the cusp of globalization for the equally fast changing field of mental health.

So ended a line that bound one family to the piece of land they worked, with the inevitable side-to-side adjustments of both the family and the property lines, for five generations. Sprecher inherited the property, keeping it in the family for a sixth generation but no longer working it himself. He’s kept his ties to the rural landscape, living on a hilltop in Sauk County, not far from the old family property, which is now cultivated as leased land. These days Sprecher, retired from his social service career, helps build up the central Wisconsin cultureshed, as the Wormfarmers call it. Since 2020, he’s supported the Wormfarm Institute’s DTour by hosting art projects and installations.

In the early part of the summer I had a chance to pass a couple of afternoon hours with Sprecher over his kitchen island, enjoying the loose old photos he’d pulled out for me, none of them digitized. He told me about the egg-centered production of his grandparents, and how they’d occasionally write their name and address on an egg just to see if a random customer cared enough to write back, message-in-a-bottle style. And at least one did. He talked about his parents’ operation, mostly raising beef cattle and swine, which was unusual for those decades in America’s Dairyland (his father decided early on that he hated having to milk cows). And about the exertions of haying before throw balers were a thing. About growing fruit, foraging and hunting as essential elements of their family farm’s semi-self sufficiency. About his father and mother as partners–Dad performed the farm labor, Mom kept the books. About his overnight duties when a sow was farrowing, keeping watch as the piglets emerged safely and his parents slept. Sprecher was a kid, with hands small enough to reach into the sow and adjust a tangled piglet if necessary. Specher told me about how his father, once a churchgoing Protestant, tired of the congregation’s internal dramas, so much so that he up and quit the church.

The numbers of farmers may dwindle but Sprecher’s memories remain alive. And while activity on the Sprecher farm has varied greatly throughout the years, a spirit of innovation, generosity, and land stewardship endures as Scott has supported entrepreneurs and artists that bring livelihood to the region. For the 2020 Farm/Art DTour, he hosted New Orleans artist Brent Houzenga, the son of an Illinois farmer who merges his rural roots with a street-art style. Brent first created a painting from an old photograph of Scott’s father Ervin Sprecher, then worked with a sign company in New Orleans to blow it up to billboard size.

Scott also supported a collaborative team of artists, Sheila Novak, Emilie Bouvier, and Crysten Nesseth as they installed a series of cyanotype banners along the banks of Honey Creek, which told community stories. And in the Harrisburg Church, an historic one-room structure that was vacant from 1958 until the 2020 DTour, Scott worked with Sauk County artist Hartmut Ringel to clean out the building and repair the steps so the artist could install hundreds of eggshells on the freshly swept floor. Ringel has continued to use the church as an artist studio and exhibition space with Scott’s permission, and will install new work there for the 2022 Farm/Art DTour.

Bringing the freedom and unpredictability of contemporary art into this setting is fitting. The lands surrounding Honey Creek were settled by Scott’s forebears, who trace their origins to the town of Burbach of Westphalia, Germany. From the times before then, there is evidence that the creek banks were frequented as a way station by bands of Sac (or Sauk), Ho-Chunk, and peoples of other regional tribes passing through. Now the sweep of history over these rolling lands verges on a next chapter. The Sprecher property, already granted Century Farm status by the state of Wisconsin and headed now towards Sesquicentennial recognition, has managed to evade the logic of corporate megafarming, a newer form of violence from the perspective of sustainability. There may still be a different future possible, and certainly the area’s organic and artisanal producers believe they can make that a reality. Opening new attitudes, adjusted relationships to land, and different ways of seeing–in a sense redirecting the inherited flows over the cultureshed–won’t happen without the generosity of people like Scott. It takes that wide-angled view to strike the essential balance between a respect for history and an openness to new ways. 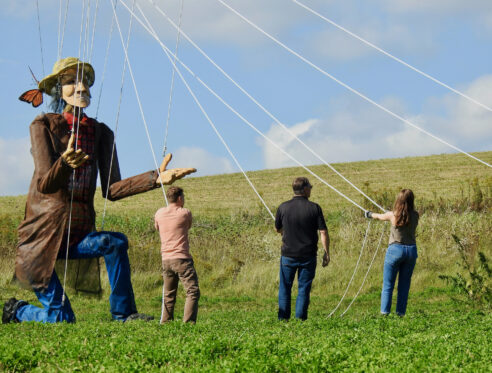 The Giant Farmer of Plain 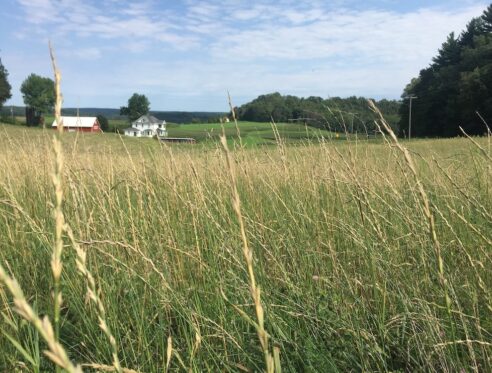 "A Grain of Truth" by Elena Byrne 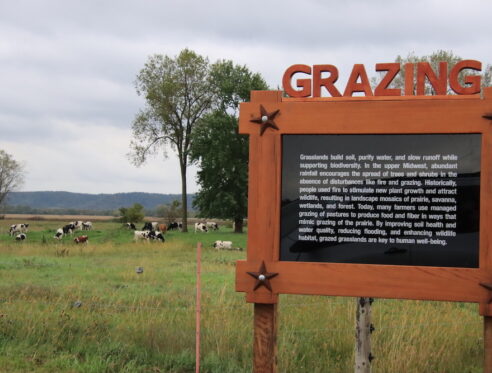 "More Than Dirt" by Serge Koenig